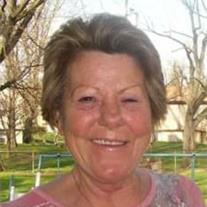 WALDBILLIG April A. (nee Wieland), 69, of Batavia, Ohio went to be with the Lord on Tuesday, May 19, 2020. She was born April 4, 1951. Wife of the late Robert Joseph Waldbillig who passed on March 27, 2013. Loving Mother of David, Roger, Bobbie Jo, Mark and Brian. Dear sister of Maxine (Robert) Martin and Shirley (Terry) Lawhorn, late Randolph "Randy" and William "Bill" Wieland. Cherished grandmother of Angel, Bethany, Carlee, Destree, Keyona, Jason, Mark Jr., David's son, Kimberly, Kayla, Hailey, Cody, Casey, and the late James. Also survived by numerous great-grandchildren and Aunt to many nieces and nephews. April enjoyed gardening and spending time with her grandchildren at Kings Island and especially at the Cincinnati Zoo. Services will be held privately at Moore Family Funeral Home followed by interment in Batavia Union Cemetery. Memorial donations may be made to the Cincinnati Zoo in her memory. https://cincinnatizoo.thankyou4caring.org/pages/emergency-fund
To order memorial trees or send flowers to the family in memory of April A. Waldbillig, please visit our flower store.