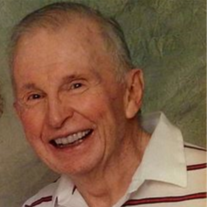 John J. Rutledge was part of a generation that fought in a war and returned home, never bragging about any of it, and then built a career and family. In rare cases when he spoke of his military experiences, it was only with fellow veterans. A sergeant with the U.S. Marines during the Korean War (1951-53), Rutledge received the Korean Service Medal, United Nations Service Medal and National Defense Service Medal. He returned home and became an insurance underwriter in New York and later Cincinnati, last working locally with Fireman’s Fund Insurance. Mr. Rutledge died March 27, following health issues that kept him homebound for years. He was 86. The oldest of three sons born to Gilbert and Anne Rutledge, he was preceded in death by his brother Donald “Buddy” Rutledge, and is survived by brother Bill Rutledge of Connecticut. He married fellow Bronx, N.Y., native Margaret Mary “Margie” Ruane on Jan. 20, 1962, and they celebrated their honeymoon in a bitter cold Lake Placid, N.Y., where it was so cold the batteries of their camera burst when taken out of their coats. “He was a great Dad throughout the years,” said son Dan Rutledge. “He raised five kids and we all turned out real good.” “He was a Marine veteran – the first generation of three, so far,” Dan Rutledge said. “Just a great all-around guy. He always helped you out whenever you needed help, like a Dad should do.” Dan’s son, Trey Rutledge, was deployed this month with the Marines to the Middle East. Dan’s four siblings all graduated from Ohio State University. Mr. Rutledge was delighted by his nine grandchildren, who have fond memories of spending overnights and other fun times. The day before his passing, he had difficulty speaking, but he smiled and winked at granddaughter Lindy and other family members. When he passed away, Irish music was playing and his wife was praying the Rosary. Survivors include Mike (Debbie) Rutledge of Anderson Township; Anne (Charles) Lorberau of Oregon; Margo (Scott) Kissell of Oxford; Ajax (Elsa) Alexandre of Anderson; and Dan (Kim) Rutledge of Iowa. Devoted grandfather of Bryan (Casi) Rutledge, Nicolle (Kevin) Hook, Trey Rutledge, Anais Alexandre-Reverendo, Luka Alexandre-Reverendo, Quinn Kissell, Gil Rutledge, Ravenna Rutledge and Lindy Rutledge. Wake prayers will be held Friday (March 31) at 8:45 a.m. Visitation will be 9-10 a.m. Friday at Immaculate Heart of Mary Catholic Church, 7770 Beechmont Ave. Mass of Christian Burial will be 10-11 a.m., with burial following at Gate of Heaven Catholic Cemetery. The family asks that in lieu of flowers, memorial contributions be made to United Service Organizations via www.uso.org/donate.
To order memorial trees or send flowers to the family in memory of John Joseph Rutledge, please visit our flower store.

Mass of the Christian Burial