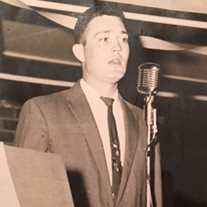 Joseph Thaddeus Dodd October 19, 2017 Joe Dodd, 83, left his loving family and friends on October 16, 2017, taking his eternal optimism, sense of humor and genuine love for everyone he met to his new Heavenly home. Survivors include his wife Rose (McGoron) Dodd, his and her children, Julie Dodd Thomas (Paul), Maureen Dodd (Martin), Michelle Dodd Maynard (Greg), Steve Dodd (Debbie), Dave Wyatt (Lisa), Mark Wyatt, and Brooke Wyatt Sauter (Joe) and fourteen grandchildren, Joey and Cassidy Sauter, Chynna, Mason and Marshall Wyatt, David and Lauren Wyatt, Lauren (Justin Yoshida), Andrew and Kyle Thomas, Ellen and David Maynard and Amber and Austin Dodd, and two great grandsons, Ronin and Caellum Yoshida. Survivors also include his two brothers Don Dodd and John Dodd (Barb), 37 nieces and nephews, and one aunt (Lucile Dodd) and ten cousins. Joseph Thaddeus Dodd was born on November 10, 1933 at home in Chicago, Illinois and when his mother took one look at him, she was rushed to the hospital. No actually that is not completely true, but Joe always told people that when asked where he was born. He was born in Chicago, Illinois, the third of nine children. His parents later moved to Clinton, Iowa where he spent his childhood and high school years. Despite a large family and the depression, he graduated from St. Ambrose College and later secured a Master’s Degree in Music. Joe impressed his classmates, winning track events in the high jump and pole vault and playing football and basketball. But it was his voice and love of singing that brought great joy in his life and to everyone who heard him. He had a song for every occasion and inspired an appreciation for music at every opportunity. Even today his nieces and nephews recall songs he taught them more than 40 years ago. In 1955 he married Nancy Pompa from Aurora, Illinois. Soon after, the Army insisted he spend his days at a variety of their bases, including Ft. Huachuca Arizona, preparing for battle and leading the troops in song. Completing his active duty before needed for combat, Joe moved his family from Arizona to Iowa where he was a music teacher and lived on a working farm. A year later, missing Arizona, Joe and Nancy secured a music teaching position for Joe in Arizona, where Joe continued to teach for more than a dozen years. Joe acquired many friends and made a huge difference in his community. He was the choir director and Joe and Nancy led the youth group at their parish. Joe battled with the pastor to add guitar masses, hoping to appeal to the youth. Joe led the congregation in song from the altar for every mass on Sunday and sang at weddings and funerals. He was a member of the Men’s Orpheus Choir and recorded solo songs on their albums. He coached his children’s athletic teams and skated with them at air-conditioned roller rinks during hot Phoenix summers. To stay connected to his Midwest roots and family, the family vacationed in Iowa and Illinois most summers. Joe took a sales position with McGraw Hill that became the first of several sales positions throughout the duration of his career. Later, McGraw Hill transferred him to Cincinnati Ohio and it was there that he met and married Rose thirty-three years ago. Joe was just as involved in his parishes and family in Ohio, directing and singing in a number of choirs and entertaining friends and family whenever they gathered together. Becoming a stepfather to Rose’s children and later a grandparent to their children, he was enthusiastic and supportive of their endeavors. He particularly enjoyed watching their musical performances and furthering their musical talents. Joe had a great love for people. If he didn’t know anyone when he walked into a room, he knew them all by the time he walked out. He frequently learned all about complete stranger’s lives, likes and dislikes while he waited in lines at the grocery store, the DMV or for rides at amusement parks. He extended his hand and his heart to anyone in need and shook the hand of anyone standing next to him. He shared jokes and stories that appealed to the listener……always knowing how to put people at ease and letting them know he cared about them. Joe woke up each morning and thanked God for the gift of the day. He didn’t spend time grieving the past or worrying about the future. He participated in each day and at night counted his blessings with gratitude for whatever came his way. Joe died the richest person filled with an abundance of love he acquired from all who met him for the difference he made in their lives. The funeral mass for Joe Dodd will be celebrated on Friday October 27 at 10am, at Immaculate Heart of Mary Church at 7820 Beechmont Ave, Cincinnati Ohio. The family will be available from 9-10am for a visitation in the Guadalupe room located at the back of the church. In leu of flowers, donations can be made to the Hospice of Cincinnati in the name of Joe Dodd. You can make them at this site: https://www.hospiceofcincinnati.org/donate.shtml Farewell loving Father, Husband, Brother, Cousin, Uncle, and Friend. Heaven now has a new tenor to accompany the angels in song!
To order memorial trees or send flowers to the family in memory of Joseph T. Dodd, please visit our flower store.

Gathering of Friends and Family