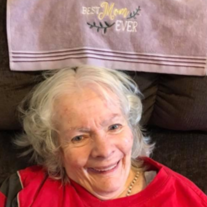 Margaret Mary (nee Ruane) Rutledge July 23, 1935-March 16, 2018 Margaret M. “Margie” Rutledge was part of a wave of women who learned to successfully juggle motherhood with a career outside the home. She delighted in both roles, especially raising five children with John, her husband of 55 years. The legendary “Margie account,” a college fund she filled with earnings from her secretarial wages, helped fulfill the couple’s dream of ensuring college would be within reach for their children. Four of them graduated from the Ohio State University and the fifth followed his father into the Marine Corps. Mrs. Rutledge died March 16 following a stroke. She was 82. Despite complications that made it nearly impossible to speak and necessitated the need for hospice, she maintained the spunk she was known for throughout her life. When she was young, that lively personality — coupled with her strawberry-blond hair and striking blue eyes — reminded her children of Lucille Ball. A lifelong Catholic, she met fellow Bronx, N.Y. native John Rutledge at an Irish dance, where he was playing the accordion. He winked at her. They married on Jan. 20, 1962 and started a family within the year. Four other children quickly followed, fulfilling their dream of having a large family. Her love of children showed outside the family in her volunteering at the New York Foundling, teaching Catholic religious studies (CCD classes) and serving as a Girl Scout leader for her two daughters. In 1977, after John’s transfer to Cincinnati as an insurance underwriter, she held several secretarial positions throughout the area. Raising five teenagers, they became a fixture in the stands at endless swim meets, soccer games and other sporting events. They also enjoyed watching Ohio State games with their Buckeye children and grandchildren. After John suffered a serious stroke in 2000, she demonstrated the commitment to her vows, “in sickness and in health, to love and to cherish, till death do us part.” He died March 27, 2017. Survivors include Mike (Debbie) Rutledge of Anderson Township; Anne (Charles) Lorberau of Oregon; Margo (Scott) Kissell of Oxford; Ajax (Elsa) Alexandre of Anderson Township; and Dan (Kim) Rutledge of Iowa. Devoted grandmother of Brian (Casi) Rutledge, Nicolle (Kevin) Hook, Trey (Lexi) Rutledge, Anais Alexandre-Reverendo, Luka Alexandre-Reverendo, Quinn Kissell, Gil Rutledge, Ravenna Rutledge and Lindy Rutledge. Visitation will be 9-10 a.m. Wednesday, March 21, at Immaculate Heart of Mary Catholic Church, 7770 Beechmont Ave. Mass of Christian Burial will be at 10 a.m., with burial following at Gate of Heaven Catholic Cemetery, Cincinnati. The family asks that in lieu of flowers, memorial contributions be made to Hospice of Southwest Ohio via www.hswo.org or a hospice in your local area.
To order memorial trees or send flowers to the family in memory of Margaret Mary Rutledge, please visit our flower store.

Mass of the Christian Burial