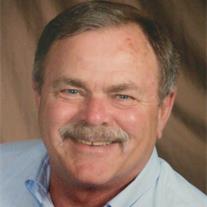 Russell Gene Hoffard, Jr. was called to his eternal place of rest with our Savior, Jesus Christ, on March 10, 2021 after a short battle with pancreatic cancer. He was born on October 9, 1953 in Cincinnati, Ohio to the late Russell Hoffard Sr. and Marion Bleil Hoffard. Russell completed high school in Houston, Texas, obtained his Associate's degree, and joined the Houston Police Force in August of 1976. Russell worked for the department for 29 years before retiring as a Sergeant to his home in Pearland, Texas in July of 2005. His life was blessed with three beloved children, Heidi, John, and Neil, who gave him the opportunity to be a loving father. When his children were grown, Russell returned to his hometown of Milford, Ohio and reconnected with his childhood friend, Susan Wallace. He and Susan married on November 4, 2017, and he lived out the rest of his years with the love of his life. The two were inseparable and enjoyed spending every minute they had together shopping for antiques, landscaping the yard, and renovating their home. Russ loved to cook and was often found grilling something delicious on the barbecue pit. In his earlier years, Russell enjoyed many hobbies including woodworking, coaching little league baseball, fishing, hunting, and bragging about his children's accomplishments. He loved sports, mainly baseball, and followed the Cincinnati Reds religiously. He was proud to teach his youngest son, Neil, the game of baseball and spent countless hours on the fields in practice and coaching his games. He often boasted about his daughter, Heidi, and her skills on the volleyball court and his oldest son, John, and his accomplished career in the Houston Fire Department. Russell attended Trinity United Methodist Church in Milford, Ohio and established a strong and loving relationship with his Lord and Savior. His closeness to God is what carried him through in his final days. Russell was known for his sense of humor, notably sarcastic comebacks, and his unmatched wit. He lived his life with a strong exterior, but was about as tenderhearted as they came. May our loving husband, father, brother, and Pop rest in peace. His love for all of us will remain in our hearts until we meet again. Russell is survived by his wife, Susan Hoffard; children Heidi Eberhardt and husband, Curtis; John Hoffard and wife, Anna; and Neil Hoffard and wife, Amanda. He is also survived by seven precious grandchildren whom he loved dearly: Ryan, Wyatt, Evan, Addison, Connor, Jacee and David. He is survived by Susan's children Amy Neugebauer and husband Jeff Neugebauer; and James Wallace. Russell is also survived by his sister, Brenda Simpson, and husband Rod as well as countless cousins, nieces and nephews. The family will receive friends from 10:30 AM until 11:30 AM on Wednesday, March 17, 2021 at Moore Family Funeral Home, 6708 Main Street, Newtown, Ohio, with the funeral service commencing at 11:30. Condolences may be sent to the Hoffard family in the care of Moore Family Funeral Home at www.moorefamilyfuneralhomes.com.
To order memorial trees or send flowers to the family in memory of Russell G Hoffard, please visit our flower store.